Christmas on the Non-Stop Picket

The Non-Stop Picket of the South African embassy was just that.  It was ‘non-stop’ and that included Christmas Day.  Just as this year various Occupy encampments  have been getting publicity for their intention to keep protesting over the festive period, so too did the Non-Stop Picket.  This media coverage usually presented the story in one of two ways – the socialist and progressive press highlighted and celebrated the picketers’ determination, while the more mainstream papers gently poked fun at the strange group of young people who would rather demonstrate their solidarity with distant others rather than be with their families.  The reality, of course, was probably a combination of the two: for many picketers, especially those who lived far away from their families, or had strained family dynamics, spending Christmas Day on the Non-Stop Picket offered them the opportunity to be with the people who really mattered to them. 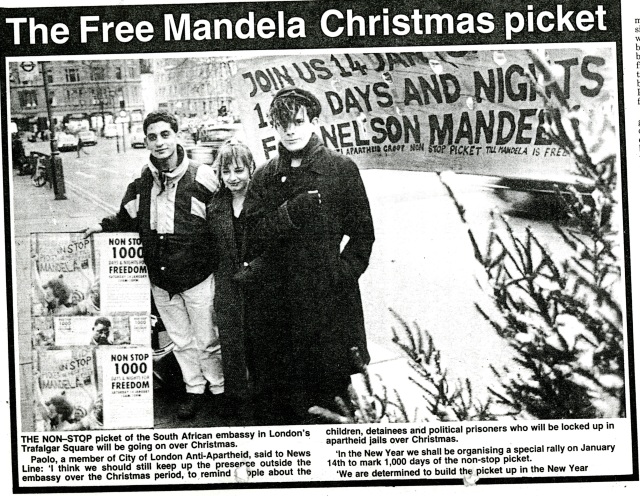 One tradition developed on the Non-Stop Picket was the annual visitation on Christmas Day by ‘Father Freedom’.  In 1986, the Picket’s first Christmas, this role was taken by Cllr Bob Crossman, the then Mayor of Islington and a sponsor of the Non-Stop Picket.  A few weeks earlier, Bob Crossman had helped host the Music for Mandela benefit gig at Islington Town Hall.   In a letter dated 8 December 1986, Andy Higginbottom, the Secretary of the City of London Anti-Apartheid Group, wrote to Bob Crossman inviting him to attend the Picket on Christmas Day.

‘Our idea is that yourself and Mary Cane [Mayor of Camden] act as a socialist Father and Mother Christmas, preferably Father and Mother Freedom and we have a present giving on the picket to the youngsters who spend a lot of time there keeping it going.’

In subsequent years, the role of Father Freedom was played by Hamilton Keke, the Chief Representative of the Pan-Africanist Congress in the UK.

In the days around Christmas, the Picket would receive extra donations of food from supporters and well-wishers.  Christmas Eve in 1988 was a Saturday.  I was Chief Steward on the Picket from 12-6pm that afternoon and recorded in the steward’s notebook:

All quiet on the picket front – there’s no-one around.  …  But, we’ll be well-fed today: we’ve had Lena’s pizza, Cranks have donated pots of muesli and salad, and Breadline say they will bring lots of cakes round when they close.

It’s Xmas Eve and my kids are all waiting for me with hot grog and cheer, I don’t want to be here.  Not all night!  … If I am stuck here much longer I shall sulk all over the holidays till New Year is in.  it’s difficult to be sad though when I’ve got Errol making me laugh and all this lovely food – donuts in sugar and two large boxes of food, Xmas cake, mince pies.

By the next morning two bottles of wine had been donated, one from Hemel Hempstead Anti-Apartheid Group, the other from a passerby.  Given the Picket’s no alcohol rule, these were stored until they could be raffled at a future City Group meeting.

Although Christmas time on the Picket could be fun, and brought in both donations to sustain the Picket and extra financial donations and material aid to send to South Africa, in other ways, it was business as usual.  On the evening of Christmas Day 1986, Grace was Chief Steward and recorded the following note:

It’s been quite a peaceful evening until about half an hour ago AD464 [a police officer] came on, insulted a few people on the picket a few times, then walked off.  Martin was leaving the picket, AD464 met him on the corner, searched him and then threatened to beat him up when he was in plain clothes.  He called Martin ‘a disease’ and insulted him more and other people on the picket.  he said he was going to cure the [‘disease’] of the picket.

In the cold mid-winter, the war of attrition between the Non-Stop Picket and the Metropolitan Police continued.  For the Met’s finest, there was little Christmas cheer for anti-apartheid protestors.

Do you have memories or photos of Christmas on the Non-Stop Picket?  Please share them with us.

We’ll be taking a short break, but will be back in January with new stories from the archives.  ‘Til then, enjoy the festivities, however you celebrate them, and have a Happy New Year!

1 Response to Christmas on the Non-Stop Picket