Zephania Mothopeng was the President of the Pan Africanist Congress of Azania (PAC), one of the liberation movements that fought apartheid in South Africa.  Following his unconditional release from jail in South Africa in November 1988, he spent several months during the spring of 1989 in London receiving medical treatment.  On Thursday 6 July 1989, at the end of that visit, he addressed a packed rally at Conway Hall in London that the PAC had organised for him, with the assistance of British supporters. 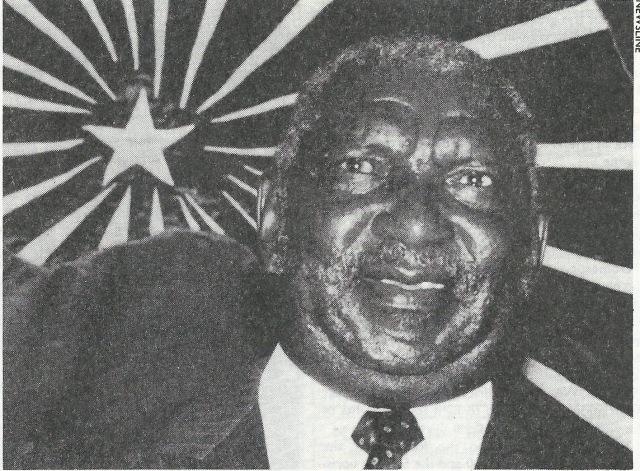 Mothopeng (or ‘Uncle Zeph’ as he was fondly known) had played a key role in the anti-apartheid struggle and had been imprisoned several times for his political activities.  He was a founding member of the PAC alongside Robert Mangaliso Sobukwe in 1959 and was central in organising the Anti-Pass Campaign in 1960 that resulted in 69 protesters being massacred at Sharpeville.  He was involved when the PAC was banned by the South African state, went underground and launched the armed struggle.  Released from a ten-year period in jail in 1973, he became a leading political organiser in Soweto.  In 1976, he was charged with ‘anticipating and organising’ the Soweto Uprising with other members of the PAC and the Black Consciousness Movement.  Following the Bethel Treason Trial, which was held in secret, he was imprisoned again, staying in jail until his early release on the grounds of ill-health in 1988.  As Carol Brickley, the Convenor of the City of London Anti-Apartheid Group, reflected at the time,

Somehow, President Mothopeng has managed to be out of jail at decisive times when the black majority [in South Africa] have unleashed their power and pushed history forwards.  There are not many in the liberation movements who have such a history. [Fight Racism, Fight Imperialism, 88, July/August 1988, pg 11].

Despite his poor health, Uncle Zeph spoke for over an hour at the rally, offering a history of the PAC, a review of its core political tenets and an appraisal of the state of the struggle against apartheid at the time.  The following extract from his speech articulates Mothopeng’s commitment to fighting for a decolonized Azania organised on (state) socialist principles:

We demand comprehensive and mandatory sanctions on the racist regime.  We reject the contention that they hurt us more than the oppressor…  However, we will not have a revolution by sanctions alone or the downfall of the racist apartheid regime.   Sanctions play a supportive or complementary role…  To those who contend that continued investment will improve apartheid out of existence, we maintain the simple logic that you cannot feed a snake and hope it will die…

On the question of negotiations our position has always been that there can be meaningful negotiations only from a position of strength, and a willingness on the part of the settler minority to accept the will of the African majority.  As of now, that willingness is lacking…  I must emphasize that the workers and the people are the very heart of the struggle for national liberation and self-determination.  And they will continue to be the vanguard to consolidate freedom and self-determination, to ensure an equitable distribution of the land and wealth…  Economically we stand for a planned economy…  It is our contention that the vast illiterate and semi-illiterate masses of Azania are the cornerstone of the struggle for democracy.  [reproduced from Fight Racism, Fight Imperialism, 88, July/August 1988, pg 11]

Although the large hall at Conway Hall was packed to overflowing for the rally, representatives of the national Anti-Apartheid Movement were conspicuous by their absence.  Instead, the rally was addressed by representatives of the All-African Peoples’ Revolutionary Party, Labour Party Black Sections, Paul Boateng MP (later to be the British High Commissioner to South Africa under New Labour), the Revolutionary Communist Group, the Deputy President of the National Union of Journalists, and the Carol Brickley for the City of London Anti-Apartheid Group.  At least half the audience consisted of South African exiles and their Black British supporters.  The crowd attracted to the rally suggests that there was an audience in Britain for the politics advocated by the Pan-Africanist tendencies within the anti-apartheid struggle, that the anti-apartheid movement could have done more to actively engage Black Britons in its work, and that these politics were not viewed as ‘racist’ (as the AAM often suggested) by white supporters.

A week after the rally, the London representative of the PAC wrote a letter to the City of London Anti-Apartheid Group with ‘revolutionary greetings’ and thanks for their consistent solidarity and support, he noted, particularly that

the PAC appreciates the support the City Group gave before and during the rally at Conway Hall on 6/7/89. The success of the meeting vindicates the right principles of unity and non-sectarianism the City Group rightfully upholds. Please accept comrades PAC’s highest consideration.

For City Group supporters, helping to provide a platform for President Mothopeng to speak in London was an act of solidarity.  Hearing his analysis helped connect them to the struggle being waged in South Africa at the time.  But, in very real terms, their solidarity was enacted through the modest acts of practical support and advice in helping the rally to happen and taking a key role in mobilizing an audience for it.  Their solidarity, then, was enacted through relatively modest acts in London, even as it build relationships and connections across spatial distance.