We learnt recently of the death of Solomon Odeleye, from cancer, at the age of 57.  Solomon came to Britain from Nigeria as a young teenager in the late 1960s to study at Worcester College for the Blind (now New College Worcester).  He continued his studies in the UK and made his life in London, where he became involved in anti-racist and anti-apartheid politics. 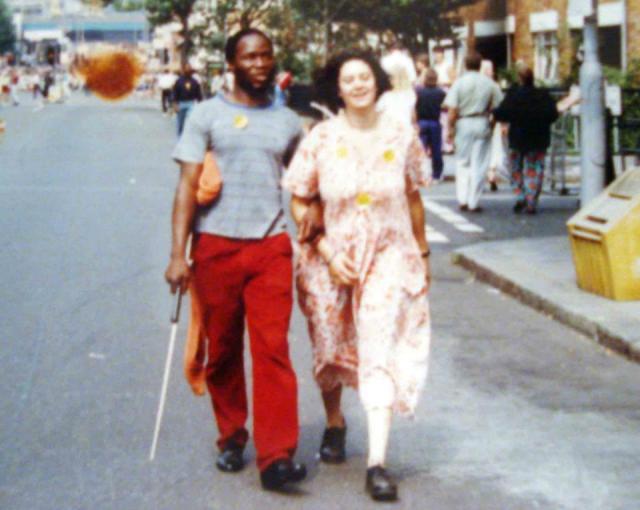 an active campaigner for the African National Congress, participating in demonstrations, after which he several times became an overnight “guest” at Holborn police station in London.

Solomon was an active campaigner against apartheid, a member of the City of London Anti-Apartheid Group and a frequent participant in the Non-Stop Picket of the South African Embassy.  He never let his blindness prevent him from fully participating in anti-apartheid solidarity work.  It was on City Group protests that he was arrested.  Solomon was a keen cricket fan and was so outraged by Mike Gatting’s proposed boycott-busting rebel cricket tour of South Africa in the late 1980s that he volunteered to participate in direct actions protesting Gatting’s involvement. On this blog, last year, Richard shared his memories of invading a cricket pitch, in protest at the tour, with Solomon:

My abiding memory of running on to a cricket pitch was with Solomon who is blind. I hated it because you had to sit for hours waiting to run on and I felt sick with fear. When we did run I was holding hands with Solomon. I realised I could get to the cricket stumps so I shouted to Solomon, `can I let go?’ `Yes!’ he shouted and he let go of my hand and he kept running on his own. I was amazed at how brave he was especially as a policeman then rugby tackled him (that’s not cricket) and he had no idea it was coming. I got to the stumps and pulled them up.

Francis, who was also present that day, remembered that,

it was hilarious to see him running all over the pitch at Lords with his white stick and shouting slogans in his booming voice!

Many Non-Stop Picketers remember Solomon with great fondness, as gentle, kind and funny man.  Most of all, they remember his capacity to talk, at great length, especially with those he was close to – wide-ranging, two-hour phone calls were not unheard of. For Francis, who counted Solomon amongst his best friends in the 1990s,

Solomon was not a wishy-washy, liberal goody-goody. He was a revolutionary! But he always found humour in the cynical world of political opportunism.

Solomon studied at Portsmouth Polytechnic and SOAS, where he gained a distinction in his MA in African Studies.  He qualified as a teacher and spent some time teaching English at a school in Brent, north-west London.  Following redundancy, he continued to teach English as an additional language informally, as well as teaching braille to those who had become blind in later life.  In addition to his activism and his teaching, Solomon helped found the charity Anglo-Nigerian Welfare Association for the Blind, in 1994.

A memorial celebration of Solomon’s life is planned for 27 October 2012 at Primrose Hill Community Hall in London, starting at 2pm.  Jenny McKim, who is organising the memorial event, said:

We would be delighted if any one who knew Sol wanted to come and are inviting people to speak about him, sing a song, do a reading etc., if they would like or just come to listen, if they would prefer.

Please share your memories of Solomon – on or off the Non-stop Picket – in the comments box below and help add further detail to this obituary.