Earlier this week I received a copy of Fair Exchange, a novel from 1998 by Lynne Reid Banks.  Until recently, I was not aware of the novel, but I am glad it has been brought to my attention.  Lynne Reid Banks was a good friend of Norma Kitson‘s and, indeed, this novel is dedicated to her. 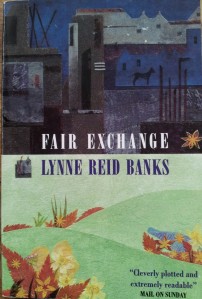 The novel is of interest to our research for two reasons.  First, one of the central characters, Judy, is clearly based, to some extent, on Norma Kitson (although, of course, this is a fictional narrative, not a biographical account).  Second, several key events in the book occur in the context of the ‘West End Group’s Perpetual Picket’ of the South African Embassy in the 1980s.  It’s not too difficult to guess who and what that might refer to! Here, the author’s ethnographic eye for detail comes to the fore in some rich descriptions of the Picket, its characters, and its relationships with the police.  In the opening chapter, the action occurs on the (fictional) Picket’s 1000th day.  The events described in those few pages are clearly based on the (actual) Picket’s celebration of its first anniversary – the daffodils and the particular dynamics of the police action against the rally are the clue here.

The whole wide sidewalk outside the South African Embassy was crammed; the tiny brave spots of yellow waving everywhere over the heads of the crowd – little earthbound specks of April sun.  It was she who had suggested the daffodils , a token of peaceful solidarity with the prisoners on this thousandth day of the picket.

As she came up with the fringes f the demo, she noticed many of the daffs had already been dropped and crushed underfoot, their spring-proclaiming trumpets mere smudges on the unheeding London asphalt. […]

She tried to push through it.  It was a good-natured crowd but of necessity packed tight.  They were unavoidably blocking the pavement, but were trying, at the stewards’ urgent behest, not to block the road.  The police had set up barriers, Judy now saw.  There was a ‘thin blue line’, perhaps thirty of them, men and women constables standing with their backs to the white building, and in front of them were metal crowd-holders, leaving a couple of feet in between to allow pedestrians to pass 0 only not many were.  Everyone who came up to the crowd seemed to be joining in.  Well, good, it wouldn’t hurt them to listen.  They might learn something.  (Banks 1998: 1-2).

Later, and closely mirroring the events of the April 1987 anniversary rally, readers are told,

At that very moment, quite unbeknownst to her [Harriet, the other central character], the police were driving a wedge into the suddenly ruptured and screaming crowd outside South Africa House. (Banks 1998: 8).

I do not know if Lynne Reid Banks was present when the Non-Stop Picket celebrated its first anniversary, and a flying wedge of police officers forced their way through the crowd to remove a makeshift stage, but she certainly visited it on other occasions.  When City Group mobilized its supporters to defy an attempt to prevent the Non-Stop Picket using its megaphone to amplify speeches, songs and chanting in August 1986, Lynne Reid Banks joined them, as this article from City Limits at the time attests:

Until recently the South African embassy in Trafalgar Square has refused to lodge an official complaint, which would oblige its staff to appear in court to give evidence. That position has now changed, and City of London AA, which has organised the non-stop picket, were informed that from 9.00am on Monday August 18 onward, any picketer singing or using a megaphone could have their names and addresses taken by police with a view to prosecution. At noon on 18 August, about 50 picketers (including Jo Richardson MP, Peter Tatchell and David and Norma Kitson), took off the white gags which they had been wearing and sang and chanted, accompanied by an assortment of instruments…Jo Richardson, City AA convenor Carol Brickley, writer Lynne Reid Banks and David Kitson addressed the picket through a megaphone…after about half and hour a message was replayed via the Chief Steward that the police would not be taking any action over the “defiance”. (City Limits, 28 August – 4 September 1986)

Having encountered the Picket on this occasion, and risked prosecution in its cause, Banks wrote to Polly Toynbee encouraging her to read Norma Kitson’s autobiography and spend a few nights on the Non-Stop Picket.  Several years later, when City Group hosted a speaking tour of the UK and the Netherlands by Lydia Nompondwana, representing the relatives of the Upington 14, Lynne Reid Banks organised a meeting for her near her Dorset home.

We hope to interview Lynn Reid Banks this summer to hear about her friendship with Norma Kitson and her encounters with the Non-Stop Picket.  Watch this space.

1 Response to “Fair Exchange”: the Non-Stop Picket in fiction