The end of the project (for now). Some thanks.

Today is officially the last day of our current funding for the Non-Stop Against Apartheid project. So, our thanks are due to a few people. But, before that, here is our (current) favourite quote from the project:

In the annals of late 20th century protest in Britain, the Non-Stop Picket stands out as one of the truly inspirational protests.  To think that people maintained a picket of the embassy night and day through freezing winters and pouring rain, for nearly four years, that’s truly extraordinary and heroic.  I feel in total awe of the people who were there around the clock, 24/7.  They made sure that the British public, they made sure that the anti-apartheid struggle and in particular the demand for the freedom of Nelson Mandela and other political prisoners, was kept constantly in the public eye.  It was an incredibly effective form of protest by a relatively small but highly motivated passionate idealistic people. The City Group exemplified the very best of international solidarity. (Peter Tatchell, 19 December 2013)

It has been a pleasure and a privilege recording their (our) stories. So, first and foremost, we would like to acknowledge and thank the Leverhulme Trust for the funding that made this research possible. Principally, their funding paid for Helen Yaffe to work on the project full-time; but it also enabled us to conduct the interviews and archival work. 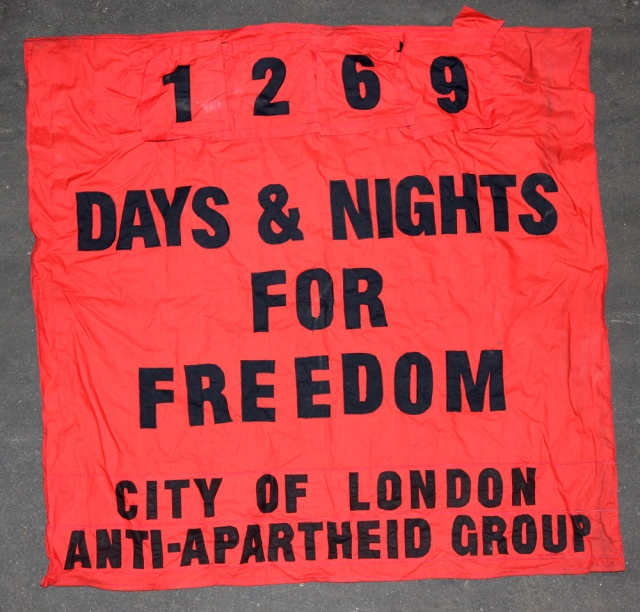 The banner that counted the days (Source: City Group)

Gavin would like to thank Helen for all her hard work and enthusiasm on the project. It is through Helen that we were able to negotiate access to the privately held archives of the City of London Anti-Apartheid Group (and Helen has played a key role in persuading the custodians of those papers that they will, eventually, be better placed, securely in the public realm).  More impressively, Helen systematically summarized and catalogued the bulk of the papers and artifacts in the archive – that summary document runs to over 400 pages. Helen has also tracked down many of the people we eventually interviewed (and a few that we didn’t) and recorded most of the face-to-face interviews we conducted. It is largely through Helen’s efforts that we recorded 90 interviews (rather than the 35 anticipated in the original grant application). Thanks to Helen’s hard work we now have a treasure trove of material that we will continue to work with for quite some time to come.

We should, obviously, thank all of the former members and supporters of the Non-Stop Picket who have shared their memories, their photos and often their papers with us. The number of people who have contributed to the project, in some way, far exceeds the 90 people we actually interviewed – some have made their support for the project clear, and lent us material, even though they chose not to be interviewed.  Our apologies to those who offered an interview but who we have not (yet) found time to talk to properly – there will be other opportunities! Several people – but particularly Nicki – have done wonders raiding their address books and putting us in touch with other former picketers.

The members of our project advisory group (although they never actually met as a group) have been there to offer advice and guidance on specific issues when we asked them. So, thank you to: our colleague at Leicester, Jenny Pickerill; Divya Tolia-Kelly (Geography, Durham); Jo Norcup (Geography, Glasgow); Kate Amis (formerly of the Royal Geographical Society): and three former Non-Stop Picketers – Cat Wiener, Deirdre Healy, and Mark Farmaner.

The development of ideas and analysis always happens in dialogue, so thank you to our colleagues, students, friends, audience members at various talks, and social media interlocutors, who have listened, asked questions, and told when they thought we were wrong.

Finally, we would like to thank the administrative and technical staff in Geography at Leicester who have helped manage our finances; booked flights and accommodation for us; designed posters for us; written press releases (and edited podcasts) to publicize our work; and calmed us down when university IT systems were getting the better of us. Thank you all!