Last year, I wrote about how the South African Embassy was attacked, with its windows smashed and a tourist display set ablaze, during the Poll Tax Riot in Trafalgar Square on 31 March 1990.  Recently we have obtained new photos of this incident (taken the following day) and unveiled some more archival material related to it. 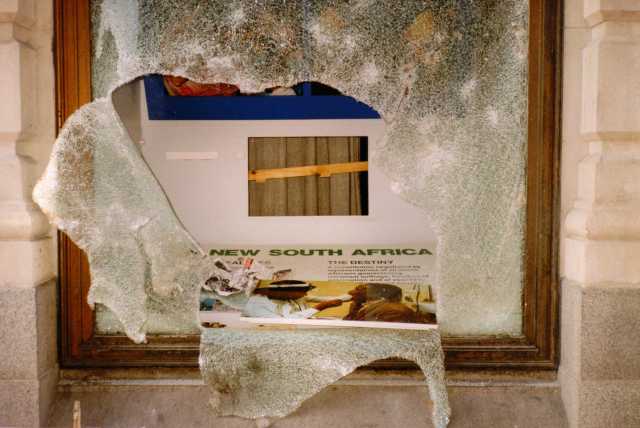 It is not clear how the City of London Anti-Apartheid Group obtained this document but, among the papers in the archive we have discovered a statement by Philip Brian Ian Milnes, a senior administrative officer at the South African embassy, regarding the damage to the building on 31 March 1990.

There were numerous panes of glass smashed and broken throughout the building. Forty two clear 14 inches x 9 and a half inches panes, nine Flemish 14 inches x 9 and a half-inch panes, five display window panes, one secondary glazing pane and six other types of pane. The total cost of replacing those windows is £6325 plus £238.35 for boarding up. On the lower ground floor of the building, facing the STRAND, four window displays were destroyed by various missiles being thrown through the windows from outside. One of these window displays was also destroyed by fire and I would estimate, from quotes given, that this would amount to about £3000 of the £1500 total…the cultural centre itself needs redecorating because of the smoke damage at a cost of £5350. On the aspect of the building facing TRAFALGAR SQUARE, there is also a damaged granite balustrade, where the stones have been forced into the wall of the building along with other damage, which will cost around £4600. Also damaged on Saturday 31/03/90 was a closed circuit television camera, external [sic] positioned…a component dislodged due to being hit apparently by some form of missile, costing £75 to repair….The total, estimated, cost of repair to the building is £33,023.35…no one can provide any details of who in particular caused any of the damage to any part of the building…’ 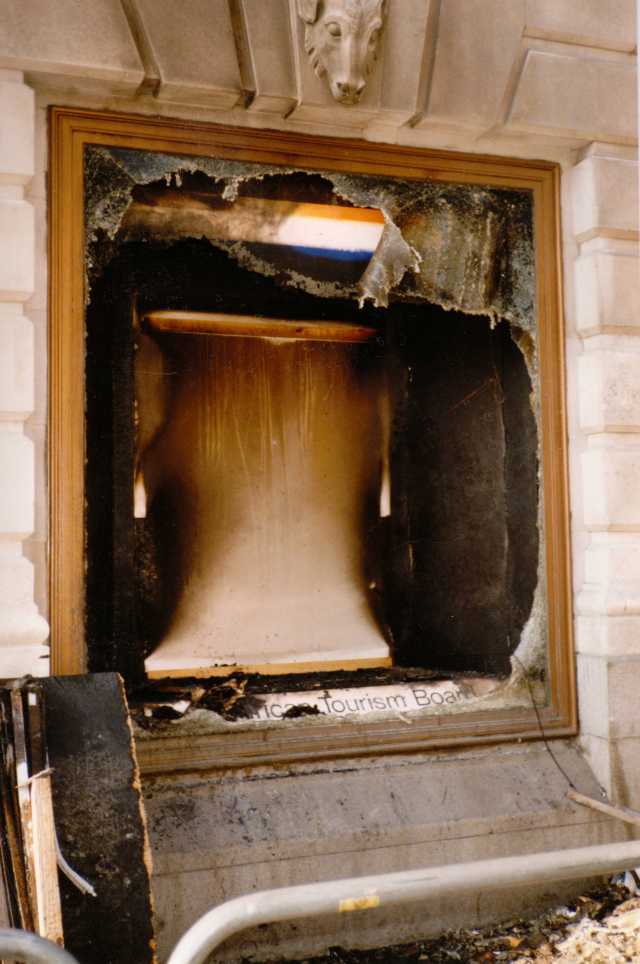 A number of City Group activists were arrested during the riot, some in the vicinity of the Embassy (although none were, as far as we know, charged with the damage to the Embassy itself).  It is likely that this statement was presented as evidence during one of the subsequent trials.

At the time of the Non-Stop Picket, the protest’s left critics (such as members of the Socialist Workers Party) often argued that it was distracting good militants from struggles in Britain.  That criticism is too simplistic.  That over sixty of the embassy’s windows were smashed during the Poll Tax Riot and the fabric of the building sustained other damage that day is suggestive of two things: first, that the resistance to apartheid in South Africa was entangled with class struggles in Britain at the time; and, second, that the volume of the damage points to the fact that more than a handful of anti-apartheid militants from the Non-Stop Picket understood this link.

Many former Non-Stop Picketers have recounted stories from their experiences of Trafalgar Square on the day of the Poll Tax Riot in the interviews we have conducted with them over recent months.  When we catch up with ourselves and have transcribed all these interviews, we will post further narratives and analysis about that day.