Throughout the first half of 1988 the City of London Anti-Apartheid Group ran a campaign, No rights? No flights!, targeting the offices of South African Airways in London in protest at the banning of anti-apartheid organisations in South Africa.  On 2 July 1988 they had their most spectacular day of action in this campaign.  Three separate groups of protesters managed to occupy the public offices of the state-run airlines in Oxford Circus calling for a full boycott of apartheid South Africa. Two further groups were lined up to take the same action. In the face of these successive waves of protest, the South African Airways offices was eventually forced to close for the rest of the day.

Here I tell the story of that day, drawing on witness statements written at the time, and a timeline logging the action recorded by the person who was providing logistical support for it from the City Group office.  The action was highly organised.  Each of the five groups of (potential) occupiers was led by one experienced volunteer who acted as their ‘chief steward’ with the role of taking tactical decisions and liaising with the police.  Within each group, one person held a camera to record the action.  Supportive  photojournalists accompanied two of the groups. Finally a couple of legal observers and other supporters shadowed each occupation group, to witness their action and distribute leaflets about the protest to passing members of the public.  Through these combined roles, at least thirty different activists took part in the actions that day. 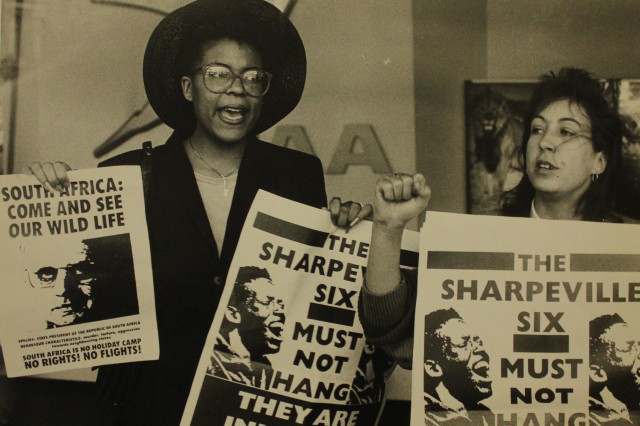 Kathy was amongst the first group to enter the South African Airways offices that morning.  Her witness statement records the events in the following terms:

At approximately 10am on Saturday 2 July 1988 I and three others entered South African Airways in Oxford Circus. […] Immediately we were admitted our protest began. All four of us took out posters of “Sharpeville 6 Must Go Free”, held these up in the windows and we began chanting anti-apartheid slogans.

When our demonstration commenced the SAA Security guard ushered all the staff at the front desk through a door at the rear of the premises. The Security guard remained in the front office with us, but did not approach us or attempt to speak to us at any time.

After several minutes 5 or 6 police officers arrived. An Inspector asked us to leave. We all refused.  Steve stated to the Inspector that this was a peaceful and lawful demonstration and asked if we were being arrested. The Inspector informed us that the police had been called in by SAA personnel to assist with our ejection from the premises. Steve enquired of the Inspector if we were being arrested and if so on what charge.  The Inspector said that if we did not leave we would be charged with police obstruction.  We all sat down on the floor and refused to leave.

Alwyn was first to be physically dragged out of the premises. Steve was then taken out of the double doors of the SAA offices. Adenike was removed thirdly from the premises. I was the last to be physically removed. I assumed at this point that I was being arrested as I had refused to leave of my own accord.  However, when I was placed on the pavement outside I found that only Steve had been arrested. Adenike, Alwyn and myself continued our demonstration outside SAA.

By 10.40am, Steve had been taken to West End Central police station, under arrest for police obstruction.  He rang the City Group office from the police station, in good spirits, to report that he was unhurt. Alwyn and Adenike reported in just after 11.00 that they were going to the police station to support him and wait for his release.

The second occupation group consisted of two City Group activists, Cat and Simon, and two supportive local councillors from the Labour group on Camden Council, Adrian States and Karen Newbury.  For context, it is important to note that Karen used a heavy electric wheelchair; her witness statement records the events of the second occupation:

At about 10.50am Adrian and I approached the SAA door.  The security guard asked why we wanted to go in.  I said I needed to obtain details of access for people with disabilities in South Africa.

He then let us in and we looked at some leaflets. Cat and Simon followed us in a minute after but were trapped in the lobby between both doors, then started singing and we joined in and we held leaflets up to the windows. We did this for about 15 minutes.  The guard asked us to leave but we declined.

Adrian States takes up the story,

The police then arrived. The policeman said that the guard had the right to evict us and could use police assistance if necessary. We still said no. I sat on the floor and held hands with Karen. The policeman and guard then lifted me up while I went limp. I was taken outside the building, followed a few minutes later by Karen. We then gave out leaflets, Karen then placed herself in front of the doors and was eventually arrested.

I was one of the support team outside the Airways offices for this particular action and I remember that Karen Newbury not only placed her wheelchair directly in front of the doors to the building, but put the brakes on.  It took the police some considerable effort to move her following her arrest.  Cat was also arrested following her eviction from South African Airways, but Adrian States was not.  Simon was not arrested for his part in the occupation, but was arrested for highway obstruction a few minutes later along with three members of the support team, Chas, Ken and Nicki, who were all distributing leaflets outside the building.

By this time, the volunteers in the City Group office were working hard calling the media about the arrests and calling high-profile supporters of the group, such as Tony Benn, requesting that they phone West End Central police station to check on the well-being of the arrestees.

The third occupation group, who were due to enter the South African Airways offices at midday were not able gain access to the premises.  As a result, there are no witness statements from this group of volunteers and it is not clear whether they were recognised and prevented from entering the building by security.  It seems more likely that their planned action had to be aborted because the police were still present outside the SAA offices following the previous occupation – Karen Newbury’s arrest was only logged with the City Group office at 11.55 am.

In the original plan for the day there were to have been five occupations in total, with teams due to enter the building at 1.00 pm and 2.00 pm too.  In the end, the remaining two groups of volunteers were reconfigured and a final group entered the building at 2.00pm.  Again, this seems to have been a tactical decision, to maintain an element of surprise, but it may also have been because the photographer for what should have been the 1.00 pm team phoned the City Group office 25 minutes before the action was due to take place to say that he was delayed.

Penny led this fourth occupation and described how the event unfolded:

Myself and Grace entered SA Airways at 14.00 and asked about flights. I said “Sorry, are you closing?” to the guard when the door wouldn’t open.

Liam entered on his own three minutes later.  Jay and Carolyn [sic – Caroline Holding was also a local councillor] were not allowed in.

The security man (or manager?) asked if we had completed our business as they wouldn’t allow someone else in. We waited 5 minutes then started chanting and putting up posters. The security guard took me by the arm and said “Are you going to leave?” I ignored him and started singing.

All the witness statements from this action tell a similar story of what happened next.  The police arrived and Penny informed them that it was a lawful, peaceful protest.  The police advised Penny, Grace and Liam that they were trespassing, but Penny countered that this was not the case as they had been granted access to a public building.  The trio then sat down in the SAA offices and continued their protest.  One by one, each of them were dragged out of the building.  Grace recorded that,

I was left on the pavement and free to go, as was Penny. However, Liam, who had done nothing different to us two was arrested.

Liam was arrested for breach of the peace and (unusually) escorted on foot by two police officers to West End Central police station.  By this point in the day, City Group’s normally tight and efficient legal support team seems to have unravelled slightly.  The log of events recorded by the volunteers in the office suggests, with some frustration, that the police at West End Central were keeping them informed of arrests (and releases from custody) faster than the legal team could manage.  In part, this might be a reflection of how frequently the office team were ringing the police station to check on the welfare of the arrestees.  In total that day, eight anti-apartheid activists were arrested in the course of three occupations of the South African Airways offices.  Five were charged with highway obstruction, two with breach of the peace and one with police obstruction.

The events of 2 July 1988 in Oxford Circus demonstrate the commitment of City Group supporters to being ‘non-stop against apartheid’.  It took a high degree of coordination to plan a day of action in which up to five groups of activists would have occupied the offices of South African Airways in protest at apartheid.  That up to twenty volunteers were prepared to risk arrest in the course of these protests demonstrates the centrality of direct action to City Group’s approach to anti-apartheid solidarity.  The support structures that City Group put in place, in terms of legal observers, logistical support from the office, and a team of people willing to keep phoning the police station to check on the welfare of those arrested and wait outside to greet them on their release added to the confidence of those risking arrest.  City Group offered practical solidarity to its own supporters, just as it took action in solidarity with those resisting apartheid in South Africa.  That City Group could mobilize three local councillors to take direct action alongside their core activists suggests that there was the potential for wider militant action against apartheid in London at the time.